Jason Nolf Moves Up to 74 Kg for World Team Trials 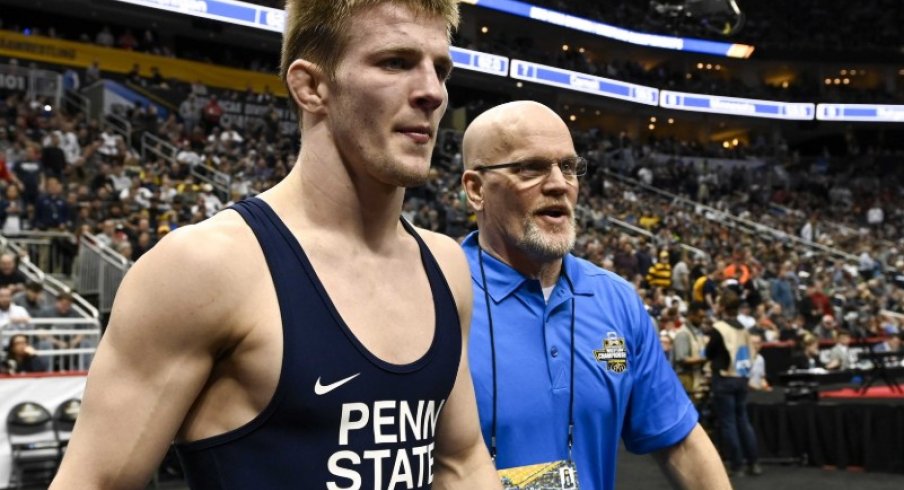 The move comes as a bit of a surprise in some respects, as 70 kg does not have as deep or as talented of a field. Despite Nolf's loss to two-time world medalist James Green, there were mistakes Nolf made in that match that could have been corrected in time for the World Team Trials.

On the other hand, the move is not that surprising considering Nolf's longterm goal is to make the Olympic team, and 70 kg is not a weight that competes at the Olympics. His options were to compete at either 65 kg (143.3 pounds) or 74 kg (163.1 pounds). Considering Nolf has been competing at 157 pounds for four years, it would be essentially impossible for him to wrestle at 65 kg with two day weigh-ins. He was always going to end up at 74 kg, so why not go now.

There is something to be said though for being the USA representative and making the world team, and the field at 70 kg is notably weaker than at 74 kg. While James Green is an elite wrestler in his own right, former rival Isaiah Martinez and all-world Jordan Burroughs are waiting at 74 kg. Nolf is opting for a much more difficult path, and while that should be commended, it also makes his chances of being the Team USA representative much more difficult.

It is unclear where Nolf will be seeded at his new weight, but in order to even get to Final X to take on Burroughs, he will have to win a best of three series against Martinez. Nolf famously handed him his first college loss with a pin in a dual meet at Illinois, but Martinez beat Nolf at the Big Ten Tournament in overtime, and again in the NCAA final. Martinez is also wrestling at an elite level, following a US Open where he won by tech fall in all of his matches until the final against Tommy Gant.

Gant is likley going to be Nolf's toughest challenge in the tournament before the best of three series with Martinez. Gant also wrestled a very impressive US Open, where he tech falled his way to the semifinals and comfortably beat Anthony Valencia. Gant poses an interesting stylistic matchup for Nolf, considering his length and how good he can be with upper body locks. He also has a lot of heart, and that can get someone a long way. If Nolf finds himself over-extended like he did against Green on two different occasions, he can easily give up another four-point takedown.

It seems pretty unlikely that Nolf will end up being the Team USA representative given his competition at 74 kg. However, counting out Jason Nolf seems like a losing proposition long term, and he has the talent on his feet to do some real damage. Perhaps Nolf can shock the United States, and the world, and claim the spot. It just feels like he needs to get a bit more seasoning before he can challenge Burroughs and Martinez.